Electric outlets are not made to be noticed. Plain and simple,

they dot the walls of your home or office waiting to be plugged. They’re unassuming, dependable, and for all intents and purposes, pretty much invisible.

But when an electrical outlet fails, it can result in major problems and safety hazards that need to be addressed. Frequently the issue is that the outlet is old, worn, outdated, or seriously damaged to the point that it needs to be replaced with an entirely new circuit and faceplate.

Chances are that you, as a home or office dweller, can not diagnose the problem an outlet is having on your own, and it’s certainly not going to tell you. But there are some common signs and symptoms that power outlets can exhibit that could indicate when it’s time to replace them entirely — and they’re signs that almost everyone can notice very easily.

This may seem like a no-brainer, but… well, it really is a no-brainer. A basic sign that you need to replace a certain electrical outlet is when nothing works when you plug into it.

But if the circuit keeps breaking down or shutting off, it may be getting overloaded consistently. The stagnant electrical outlet may be too old, worn, or outdated to handle the normal electrical flow your house demands. At that point, it’s time to call an electrician to diagnose the problem more completely and replace the unit entirely.

You see burn marks or melting, or the outlet feels warm

When the panel around an electrical outlet shows obvious signs of excessive heat — scorch marks, melted sections, or feeling hot to the touch — there’s something that immediately needs to be addressed.

There are a few different possibilities as to why burning or overheating may be happening. Arcing occurs when the metal parts connected to your outlet get damaged or dislodged from their normal position. When the electric current can’t travel through them, the power escapes the circuit and forms electric sparks. This wayward heat melts the shell of the plastic panel around the outlet.

Wires that are too old or too small can also cause outlets to get hot or burn. If the wire is too small in diameter, it will resist the electric current. Electric resistance creates heat, which scorches or melts the plastic plate. Overloading the circuit with an excessive number of power-hogging appliances can also cause heat problems.

Hot or burning electrical outlets are not to be ignored — they can lead to more widespread, catastrophic fire damage. The solution may be as easy as having your electrician replace the old, inefficient, or worn-out outlet.

You see chips or cracks in the faceplate

Fractures, cracks, or chips in an electrical outlet’s faceplate may seem like small or unimportant cosmetic issues — but nothing’s further from the truth.

Even the most minute fissures or cracks in an outlet panel are big enough to let particles of dust, dirt, and other matters get through. Over time these materials can amass and build up inside the outlet itself. When a crack forms around the holes of the outlet where the plug goes in, further decay and cracking can ultimately expose the metal contacts in the unit itself. They can also reveal loose terminals, dislodged slots, or all the individual components of the internal electrical box.

All of those situations are serious fire hazards. They can also cause severe shocks or electrocution if a person attempts to use them normally. Even if the damage from cracks or chips doesn’t seem too widespread, they should be immediately replaced. The internal wires, connectors, and metal conductors should be checked for damage and possibly replaced as well.

All the components of electric outlets are subject to wear and tear, just like any other device in the home or office. These parts include the metal contact points and small springs that normally hold plugs into place. Over time, these pieces become looser and less secure to the point where any plug you place in the socket fits too freely or plops out altogether.

Obviously, it’s annoying to have plugs falling out, but it’s also dangerous. Loose plugs conduct destructive amounts of electrical heat, which can result in arcing — one of the most common causes of fatal house fires.

To make sure the outlet itself is to blame for plugs falling out, try connecting the plugs to other electrical objects to the outlet in question. They should fit securely and cozily, with no slack or shifting. If they plug in fine, then the outlet may not be the issue. But if several of them fall out, it’s time to have an electrician check the inside walls for defective wiring or drywall damage. They’ll also replace the outlet.

You see sparks or smell smoke

As we’ve seen, excessive heat is an almost foolproof sign of serious electrical problems when you feel it on the panel of your outlet. So, obviously, actual fire is a definite indication that something needs to change, and quick.

Sparks and smoke can happen when any of the conditions described in this article — arcing, collected dust and dirt, loose or old wires, overloaded circuits, and slack connections — are in effect.

Undoubtedly, a smoking or sparking outlet is a candidate for immediate replacement. But the first action one should take is to avoid further fire damage. After you’ve unplugged a device from the wall outlet and shut off the circuit breaker, feel the area on the wall that surrounds the outlet. If it’s extremely hot or you happen to see smoke pouring out of it, it’s time to run out of the house and call emergency services.

If a fire erupts and it’s small or controllable enough for you to handle with your emergency fire extinguisher, give that a try. (Do NOT use water on electrical fires). But even if the area seems safe after your observations, call your electrician. They’ll provide a complete and thorough diagnosis.

The outlet only has two holes, no “grounding” slot

Before the 1960s, most electrical outlets in Canada had just two slots, one for a “hot” wire and another for “neutral.” This is because most electrical wiring consisted of only two pathways for the flow of electric current. Electricity in the “hot” wire traveled into the “neutral” wire to complete the electric circuit that creates power. Occasionally the hot wire produced too much power, overloading the neutral current and causing a circuit overload.

That’s why, in 1962, Canada’s National Electrical Code was changed to require the addition of a third hole — the “grounding” hole — to new electrical outlets. We see those three holes in outlets today. The grounding wire is essentially just another neutral one, but it handles the overflow of excess electricity that would otherwise crowd into the regular neutral slot. Grounding is what allows us to use modern appliances without getting shocked when a power surge happens. Most heavy-duty appliances have a grounding plug that fits neatly into that bottom slot below the two main plug holes.

But if you live in a house that was constructed before about 1965, there’s the off-chance that some of your power outlets might still be two-hole constructions. This can be a safety issue. Your electrician may need to inspect your wiring and adjust it to install a grounding current — and then, of course, replace your old two-holed outlets with a proper three-slot interface.

Your power flicks on and off

When the lights or appliances connected to a given outlet keep going off and turning back on in quick succession, it may indicate a series of loose electrical connections due to aging wires, overheating components, overloaded circuits, or parts that are otherwise in jeopardy. Just like with burning smells and smoke, this presents the possibility of serious fire and safety hazards.

Flickering power may be the result of other electrical problems outside your home that affect the power grid and often result in outages or “brown-outs.” This is probably the case if it’s happening in multiple power connections in the home. It may also be the result of your appliances decreasing in power due to normal wear and tear. But occasionally, it may be the outlet’s fault. If the flickering problem persists in the same outlet (especially with multiple electrical objects), contact an electrician to get an accurate description of the problem and, potentially, change the outlet.

Time to replace your outlets?

Home-Pro Electric serves the greater Kitchener-Waterloo area with complete and thorough servicing of your electrical needs – including the diagnosis and replacement of old or malfunctioning wall outlets. Contact us today to set up an appointment. 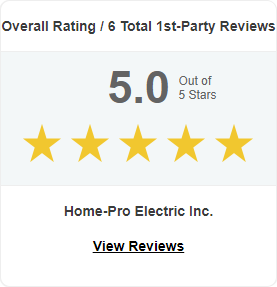 If you are looking for an electrician that is available 24/7 then please call 519-885-8268, or complete our online request form.